As I write this the tears keep coming and the water faucet of my eyes just will not shut off. I have lost two friends this weekend. I call Mrs Frazer my “Second Mother.” As a late blooming teenager I was fortunate enough to meet Laurie her daughter in a church youth group that was putting on a production of Jesus Christ Super Star. The Frazer household was a family with six children, with that many children I think Mr. & Mrs. Frazer were use to a lot of stragglers following their kid’s home. They definitely had an open door policy.  At Mrs. Frazer’s house I learned about politics, I learned to appreciate art and I learned to appreciate a good debate about things that were important in life. When I arrived on the scene three of the older children were already off at college and the three youngest daughters were there. As I mentioned earlier I was a late bloomer and the friendship with Laurie was probably more than that to me but I was too dumb or shall I say naive to notice and or act on it for that matter.

No matter who you were it seemed that you were welcome in the Frazer household. As a teenager who didn’t know where he was going my second mother gave me comfort, fed me, gave me guidance and what I felt was her motherly love, not that I was headed down the wrong path. But knowing I had a second family for a teenager that didn’t know where he fit in it was comforting. Thirty some odd years later I had been speaking to Mrs Frazer every few months or so but the last two years we weren’t able to talk and I missed that. I hope you up there giving Mr. Frazer what for in a good argument! 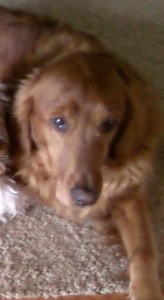 My second loss was our Golden Retriever Mesa, just less than two years after her sister Vegas who we had to put down. This was hard as you see Mesa as a puppy actually chose us to be with. No, maybe it was more like found us. The wife was at the pet store getting ready to take home another puppy a Shih tzu we named Jake. Marisia happened to walk by the dog cages that all the puppies were in and out of let’s say ten dogs only one was up all the others were sleeping.  Marisia came into view and this little Golden Retriever went crazy barking at her as she walked by.  Another lady came down the aisle and the puppy ignored her completely. Then, the puppy ignored a man walking past them. Marisia walked by again and sure enough the puppy went crazy again. All the other dogs are still asleep so what does my wife do but ask to see the Golden Retriever puppy. Once you get into the little cubicle with the puppy you know it’s over! My phone rang at work..”can we bring home another puppy”? What was I going to say but sure why not the more the merrier.  This pet store is where we had bought our first Golden Retriever “Vegas” but that was two years earlier.  Marisa asked to see the new puppy’s birth certificate. We were all in shock, this little puppy who was alone in the world, who could have been shipped anywhere in the country had found a home with her true sister as “Mesa” our new puppy had the same mother as “Vegas” our Golden Retriever at home.

Mesa was a good dog and everyone loved her and she went to doggy heaven on her own last night. I know her and Vegas are finally together again chasing the tennis balls up in heaven.