I guess all good things must come to an end. My illicit affair has ended. It wasn’t a quick fling it really was more of a long term relationship. It was also more one sided and I can only blame myself. You see I was selfish, I just took and took and never gave back. So even though I kept it going this long, it was destined to fail anyway.

So, good bye pizza, good bye Coca Cola, goodbye ice cream and my beloved desserts and most of all my childhood favorite, french toast with lots of butter and cinnamon and sugar. Oh God, that flowing river of golden butter with the bright sparkling flecks from the crystals of sugar with the sprinkled cinnamon and the vanilla extract going down my gullet is to die for. Then, add a chaser of chocolate milk and you may have hit nirvana.

You have probably guessed it by now. An elephant decided to come to Crown Point Indiana and decided to rest on top of my chest last Saturday. No matter what I did, even summoning the “Powers of Grey Skull” as I was being crushed, wouldn’t resolve this crushing squeezing presence attacking my well being. What else could I do but drive myself to the hospital. Thank God I bought the larger car compared to the sub compact I use to drive,  otherwise that elephant couldn’t have ridden with me. It’s only a mile to the hospital.

They were so accommodating and took me right away,  no waiting, right to the front of the line,  didn’t have to slip the matradee a 20 to get in. EKG was negative, blood work up for heart panel clear, then 4 baby chew-able aspirin. I told the nurses and doctors it was probably nothing. It had been 80 degrees and I was cutting the lawn, just a little heat exhaustion. Two days later and multiple tests  and an angiogram,  a small 50 percent  blockage in two  arteries,  not enough to cause the issue with the elephant. Not enough blockage to put a stint in as it has to be at least 70 percent or more blockage. They decided it’s basically heat exhaustion and  overweight by as the doctor put it ” a ton of weight”. Meaning a ton of weight,  like an elephant I guess.

The party’s over, today at lunch I ate something I haven’t had or even tried in 40 years, baked cod. It wasn’t fishy tasting and even without the ketchup,  which I added later I could eat it without puking my guts out. Here’s the proof: 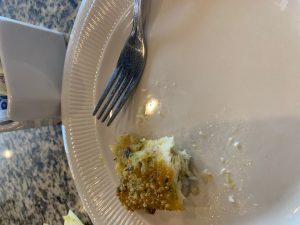 I guess I will survive somehow but more than a 100 lbs is a long way to go. It’s like they say how do you eat an elephant… “One bite at a time” Apparently that’s  how I’m going to do it.

Posts Related to My Love Affair Has Ended

1 thought on “My Love Affair Has Ended”