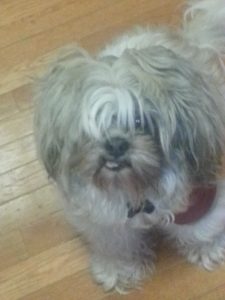 We had a Golden Retriever at home and she was the perfect dog. But we thought we should get a smaller lap dog for grandma. So we purchased Jake, a Shih Tzu but he was sick and we couldn’t take him for another week. We were told we could visit Jake every day if we wanted, he just couldn’t be near another dog until his medicine had taken effect. We did visit a couple of times during that week of waiting. Our family in a pet store is a dangerous thing with our love for pets we could have brought a dozen more animals home with us. When the day arrived, I had to work so the wife went to pick up Jake. I must preface this by letting you know that our golden retriever had absolutely bonded with the wife more than anyone else in the family. Also, our golden retriever was also a year and a half old now.

When she arrived at the pet shop they started to get Jake ready for his trip home. She decided to take a walk down the aisle past the other puppies. A brand new golden retriever puppy had just arrived and it took one look at her and went wild. It barked and barked like crazy. Of course, She wanted to see it and probably hold it but she held her resolve and kept walking. Another person was walking a few feet behind her and walked by the new puppy and the puppy didn’t even flinch. Absolute quiet, the puppy just laid there. The wife stayed out of sight and watched as several other people walked by and still no reaction from the puppy. So she decided to walk briefly in front of the puppy again. Sure enough, the puppy went crazy again. She walked one more time out of sight and the dog quieted down and several more people walked by again and nothing. She asked the store owner if she could see the puppy. Of course, they gladly obliged. It wasn’t even ten minutes after that point that my phone rang. Me being the dog lover that I was, what was I going to say. What I haven’t told you is that we bought our first dog, the other golden retriever at home, from the same pet store. The new golden puppy had the same mother as our first dog. They were sisters. How this dog knew and how it chose the wife I’ll never know.

So we ended up with the “Three Musketeers” with Jake the ShihTzu growing up thinking that he was a golden retriever and he could do anything the big dogs could do. He also fell madly in love with our second retriever and would not give up trying to figure how to mate with this dog that was five times his size. She tolerated him by letting him groom her every day that she was with us.

Today after eighteen years our third Golden Retriever “Jake”, went to be with Vegas and Mesa and I know he’s happy. Jake, you were a “Good Boy”