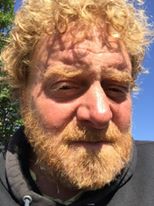 To me, Mark has always been kind of a free spirit. As a young man he displayed this free spirit by having an old square box post office truck with a mattress in the back as his main transportation. Not the typical vehicle that a teenager would have to impress the ladies or for that matter be very inconspicuous to the local police. He then liked to ride his 1300cc Kawasaki motorcycle down the Edens Expressway in Chicago going 100 miles and hour in the rain and probably without a helmet.

He loved sailing and was on a boat as often as he could. One summer he even sailed a boat all the way down the Mississippi into the gulf and over to the Florida Keys. He loved his adventures. I’m told now, that that they are restricting access to the Galapgos Islands as many of the huge turtles and many other species of plant and animal life are going extinct.  Mark was lucky to spend time there with his father and experience the formidable population that many people may never get to see.

Mark’s father, Walter was a corporate attorney and was a bit challenged in raising Mark and decided Mark needed to have some hard work, so he sent him off the mountains of Columbia in South America to build a fish hatchery for a good friend that lived there. It was probably the perfect adventure for him. Learning how to avoid the drug lords, the revolutionaries and the animal life that could kill you was something he adapted to well.

He came back to Chicago and then went into construction, working on building high rise office buildings downtown. Being a laborer down in the pits of mud wasn’t the kind of adventure he needed though despite the money that was good. It gave him the ability to learn about wines and what the difference was between a couple of hundred dollar bottle of nectar and a cheap bottle of wine. If he could of, his next adventure would of been creating a vineyard.

The direction his life took next was unexpected. He began his life in North Carolina. He got married had two kids, which were his most proud events in his life. But as life goes on, you deal with twists and turns you don’t expect. Marriages don’t always last and children grow up to begin their own lives. Mark’s dreams and adventures were long gone and his health was taking it’s toll. Like so many other people in America or for that matter the world, Mark became homeless. But he liked nature and if he had his way he would of been happy living in the forests of North Carolina. He still had skills though, and despite his handicaps he still had his humor and still could make friends and with the help of others he survived for the last two years. No, it wasn’t perfect  but he was happy. He had that free spirit in him when he was feeding his pet squirrel that had friended him and then he was going to jump in a  cool spring in the river and watch the world go by.  He would then ask me what I was doing and he would laugh as I told him I was chained to my desk at work  slaving away for the man.

About a month ago Mark called me and was crying. He said he had seen the most precious thing he had ever seen in all of his adventures. He got to see his grand daughter via facetime over the internet for the first time. He loved his children more than anything in life and despite all that can come with relationships with our families he had what most parents call unconditional love for his kids. For him that’s all that mattered and it was enough.

Not being the free spirit that my brother in law Mark was, our relationship was disconnected. I was lucky enough to have him as a brother however, my compassion for him and my unconditional love for this brother took over and I thank god that he went so quickly and that his last few months he had a good life. I’ll miss you my brother save a seat for me with you and Walter.

Posts Related to My Brother

2 thoughts on “My Brother”