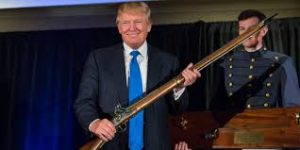 NBC just came out with an article on President Trumps proposed Military Parade. On the high end of estimates it’s at 92 million dollars as a cost for this event. This makes it even harder for me to admit that I actually worked for this idiot. Yes, I worked at one of his hotels in Gary Indiana at his Casino at the time. He has lost every casino he has been involved with over the years. He’s really not that good of a business man and is even proving himself to be an even poorer example of a President with decisions to spend this kind of money on this kind of event.

Can you imagine what could be done with 92 million dollars? Now I could make a long list of options that would change lives, cure diseases, feed hungry, help with education, and maybe wipe out the killings in Chicago. The list goes on and on and many of my friends have even many more ideas.

This is just another example of how out of touch with reality someone like him is with this kind of thinking. You need to be known for having a parade that was bigger than France’s Military Parade?

How many companies are going out of business because of the tariff wars he has started? How many people are losing their jobs because of increased costs for these goods we are importing? Yes, he’s trying to correct an imbalance that has been there for years but, there are better ways to fix the situation. The idiots that he has hired who have no experience, no clue, and no intelligence are going to make recommendations for our country’s future? Eventually most of them are either running away from their jobs before something happens or they are going to jail in my opinion.

In reality, we had no choice for President during the election and I was dumb enough to think that this was going to be a show to end all shows if he got in office. I was right. But now this Trump Variety Show has turned into the “Trump Your Worst Nightmare Movie” and it doesn’t end it just keeps on giving for years to come.

Ahh yes, let’s split up more families and rip the children from their parent’s arms and give those children nightmares. This is what happens when you put people in power who have no idea of what the ramifications of their decisions are nor do they care. When someone’s life has been to make a profit at all costs and kill the competition and anything that gets in your way to improve your personal financial situation then what else can we expect from someone like that.

We now are going to have the Trump Space Force and soon will be the local Trump Militia coming to a town near you. Maybe taking control of the media like in Russia or China. Watch out for the burning of books too.