Every day, I have a three-hour commute.  It is divided up by two one and a half-hour time periods as I commute to Chicago every day. That’s 780 hours a year. Divide it by a forty-hour workweek that’s nineteen and a half work weeks. It seems like such a waste. I can hear many of you shouting at me, as to what I could do during this commute. I could listen to relaxing music. I could listen to books on tape or is it CDs or memory stick, who knows. Or I could quietly contemplate the wonders of the universe as I pass by the scenic wonders commuting from Chicago to Indiana.

Now that all sounds wonderful but, what I experience driving is worse than if I had stayed at work with all pressure it offers. Let’s start with, I kind of push the limit on speed or so I thought. The speed limit is 55 on most of the highways going to Chicago. I generally push that to 75 or more and try and stay with a group or shall I say a “pack of us” like-minded drivers with the mindset that the Po-Po can’t stop all of us. But lately more and more, I’m getting someone coming up behind me and they are going 80 miles an hour or more and they seem to think they can just push their way through the pack. The pack usually notices this and we generally close ranks because either this guy’s drunk or has a death wish. He’s flashing his lights, giving us the finger and trying to pass on the right. We usually make them go three lanes over to have a chance to pass us or wait until we get to an area that is patrolled by the Po-Po and hope they grab him.

Then there’s all the construction and the dreaded solid white lines. Hopefully, you all know the “Rules of the Road” no one is suppose cross a solid white line. You just don’t do it. Especially in a construction zone, to many bad things can happen. But every day, there is an idiot out there that I really don’t think ever learned the Rules of The Road.

Commuting is hell and maybe if I had a chauffeur I could relax and use my time more wisely.

As many of you know I am married and I love my wife. I usually try and speak to her two to three times during the day. She is handicapped, so I have to check on her. However, if I dare to call her as I get in the car to begin my commute home after a long day I have sealed my fate. Again let me preface this, I love my wife, but I do not need to talk to her for an hour and a half. If I do call her when I begin my trip home, the odds are against me that I will be locked into this call for the entire time. In forty-plus years of sales and marketing, I have never spoken to anyone that long. Not even when I made speeches before groups.

We have entered that period of life that many people come to. The “adjustment period” is what I call it. The kids have left and abandoned us. Her mother just passed away who lived with us. She doesn’t have a car and has two dogs to talk to all day long. I’d go crazy myself if I was in the wife’s shoes. What makes it even more difficult is she is a “Type A” personality. She is the energizer bunny and doesn’t quit despite all her handicaps. But with age comes limitations as to what we can do, versus what we use to be able to do. As I approach the possibility of retirement I think my adjustment will have to be less running with the pack and more bicycle or scooter commuting. I’d still like some excitement maybe a Big Wheel is more of my style? 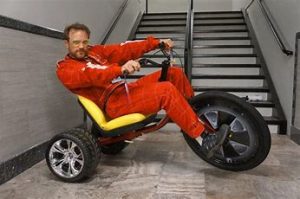 Posts Related to Rules of The Road / Life