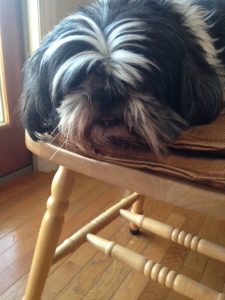 I usually call home a couple of times a day. The wife almost always has me on speakerphone as she continues to do what she had been doing. Suddenly, it will start with one short bark. Then another, and if I don’t respond to Chance, our last Shih Tzu will then begin a chorus of doggie expletives until he has my attention. I acknowledge him and he barks out what I assume is him telling me “what’s been going on all day” and or “why aren’t

you home yet and when will you be here.” I then have to talk to him and explain that I’m on my way and that he’s a good boy and I will see him soon. Sometimes he may add one more comment or two, especially if he’s agitated about something. But, usually, he accepts my response and goes to lay down on his bed and accept what I have said to him.

Every day it’s the same in that he has to talk to me and hear back or he won’t stop. The wife and I cannot continue our conversation until he is satisfied that he has expressed himself properly.

Chance and Lilly were the first dogs we had ever adopted from a shelter. We believe they were between 4-5 years of age when we chose them. We were told they didn’t have a happy life and were probably caged their entire life. We think they were used by a breeder and weren’t shown any love and they really didn’t know how to interact with us.

Somehow, in the family, it was decided that Chance was my dog. Our other dogs seemed to have bonded with other family members. Though Chance really didn’t seem to be want to bond with anyone as he was a solo dog. We could feed him and take him out but, he wasn’t much of a hugger and for the most part, stayed to himself. He would occasionally play with Lilly yet even with her he was a bit standoffish.

Lilly was with us for a few short years and acquired Ketoacidosis and was gone suddenly. It didn’t seem to faze Chance, he just went on like nothing was wrong. Actually, Chance didn’t seem to show any affection towards Lilly at all. He must have had it hard before we adopted him. He was a loner and didn’t seem to want anyone. If for some reason he would follow you around the house and not leave your side it was more of him being afraid than anything else. He didn’t want to be held, he just wanted to be protected from whatever he was afraid of.

I’m kind of the same way in that I don’t express my feelings either and stay a lot to myself. Though I could use a hug now and then.

Over the last few years, Chance’s health had been getting worse. Shih Tzu’s are prone to ear infections. His infections wouldn’t go away and in fact, spread to his skin as some sort of yeast infection that would make him scratch all his fur away. He was beginning to look like one of those hairless cats or dogs. The infections were also contagious to humans and if you touched him and didn’t wash, you could have pink eye in the morning.

Jake our other Shih Tzu had seemed immune to the infection and regularly tried to groom his buddy.  Jake just passed two weeks ago and Chance seemed to go downhill fast. I didn’t want to say goodbye so soon after having lost Jake. Despite Chance’s stance of being a loner, I loved that guy. I call home now and I wish I could hear his bark wanting to talk to me. I really do believe he understood me and I him. I believe that he got a second chance coming to be with us and we let him be his own self.

Posts Related to Chance You Were Your Own Dog

1 thought on “Chance You Were Your Own Dog”